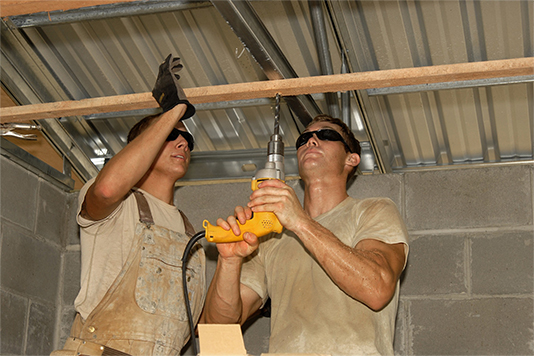 Laide & O’Brien have over 15 years of experience catering to both residential and commercial fit-outs, from the most basic office fit-out, to complex high specification pharmaceutical fit-outs.

We are proud members of the Construction Industry Federation (CIF) and in 2014 we were awarded with Safe-T-Cert accreditation, which involved being audited by an external safety auditor. This required Laide & O Brien to comply with the most stringent safety regulations relating to the construction industry. We are also listed under the Construction Industry Register of Ireland (CIRI) scheme indicating that we are tax compliant, that we comply with the current building regulations, and that we meet all relevant health and safety standards.

Our reputation is built on quality craftsmanship and dedication to our client’s wants & needs. You can find out more about the projects we’ve completed and the quality of our work in the Case Studies & Testimonials section of our website.

We would love to talk to you about any construction project. We will talk you through our process and complete all work to your exact specifications. We will also give our expert feedback and offer our guarantee that you will be happy when the job is complete. With Laide & O’ Brien, you can be sure that all work will be performed to the highest possible standard at fair and competitive prices. Call us on 087-6235361 or email us on info@lob.ie and we will get back to you.

We’d love to hear from you